The Medicine Wheel was the first Ritual & Ceremony I consciously decided to take-part in, back in 1990. It came at the end of a seven day Paul Rebillot workshop I attended, entitled ‘Owning the Shadow‘. Paul learnt how to use the Medicine Wheel through his friendship with Carol Proudfoot-Edgar – a Native American Shaman.

My first Medicine Wheel experience was very powerful and profound and has remained with me for the rest of my life. I can remember every single detail of it, as well as the personal teaching I received. Each time I have subsequently, participated in and facilitated a Medicine Wheel, it has had an equally profound effect on me, as well as many of the other participants.

The Medicine Wheel splays out from a central standing stone, with four stone spokes coming out from the central standing stone. The spokes are made up of three medium sized stones, which represent the three worlds, the spirit world, the middle world and the under world. At the end of each spoke is a larger ‘gatekeeper’ stone. Each Medicine Wheel spoke, alines to one of the four Cardinal Directions. The perimeter of the circle is laid with small stones that connect all four ‘gatekeeper’ stones together, making the complete Medicine Wheel.

When I performed my recent Medicine Wheel Ritual & Ceremony last October 2015, at the Albion Faerie’s autumn gathering, I had also been thinking about facilitating another, outside Ritual & Ceremony, using a Seven Fold Cretan Labyrinth. I wanted to create a different kind of Labyrinth to the ones I’d seen or built before. Labyrinths are usually found carved into stone, or marked out on the ground in stone, logs or rope, or cut into the grass.

I wanted to build a fire Labyrinth. Through using paraffin soaked sand to delineate the lines, it would be possible to light it. In the end the event was postponed, though I would still love to do it.

Below are pictures and a video of different Seven Fold Cretan Labyrinths. 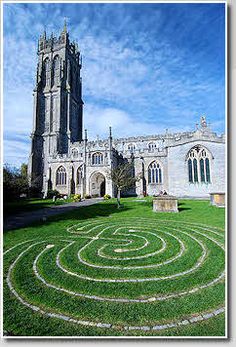 The Seven Fold Cretan Labyrinth above was constructed In the grounds of St John the Baptist Church in Glastonbury in 2007. Its outline is made of grass and blue lias stone.

Below is a picture and video of one of the pebble Labyrinths I built on the beach at Bahia Dorada in Spain in November 2005, with the help of my good friend Val and a Moroccan man, who became interested in what we were doing, after seeing our first, smaller version. 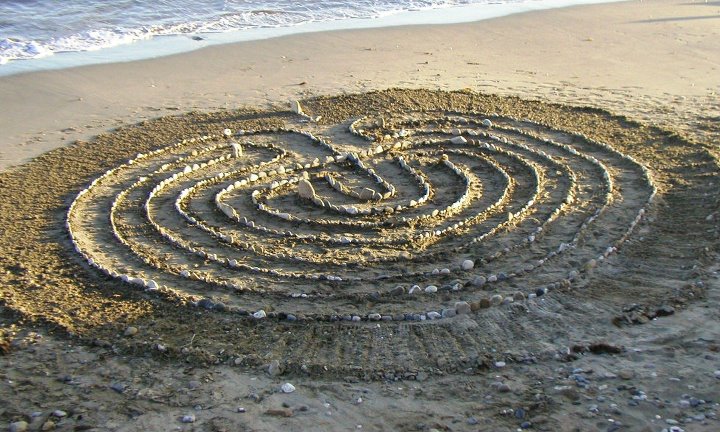 The pebble, Seven Fold Cretan Labyrinth, I constructed on a beach in Spain with my good friend Val, back in November 2005 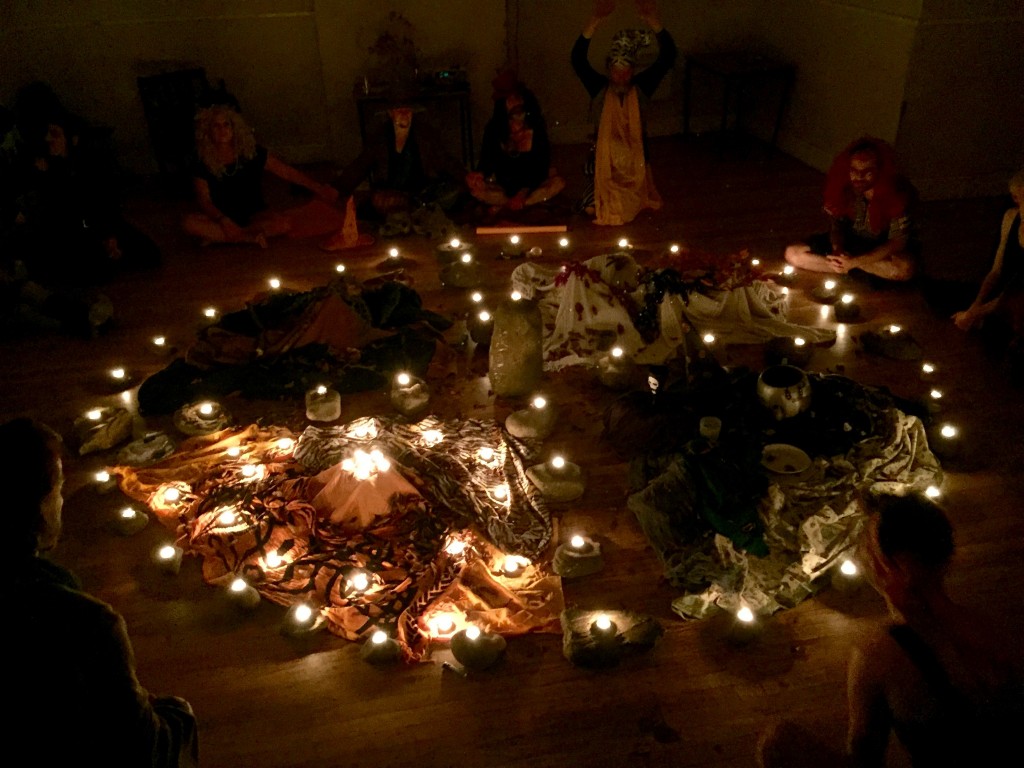 My Medicine Wheel, with all the tea-lights, still alight at the end of the Ritual & Ceremony I facilitated in October 2015

Anyone can participate in a Medicine Wheel Ritual & Ceremony, as you don’t need any previous experience. The process normally takes several hours and can accommodate around 30 – 40 participants.

The structure of the process if quite flexible, so it can be used in many different ways. The last Medicine Wheel Ritual & Ceremony I facilitated, at Featherstone Castle in Northumberland last October 2015, was themed around connecting with our Ancestors. We were individually, going to ask one of our Ancestors for a personal and group teaching. In my opinion, it is important to receive individual teaching, when you do something like this, but I love the wisdom of group teachings. In this case, the group teaching was for the Albion Faeries.

My account of the Medicine Wheel Ritual & Ceremony I experienced in 1990.

As previously mentioned, the Medicine Wheel was facilitated by Paul Rebillot, at the end of his ‘Owning the Shadow’ workshop, which he held at Grimstone Manor in Devon. Paul had constructed a beautiful Medicine Wheel in the main workroom. As we entered the room, I remember feeling mesmerised by the visual impact and inherent power, that emanated from the Medicine Wheel. Like my own Medicine Wheel, pictured below, Paul’s was also made of stone. 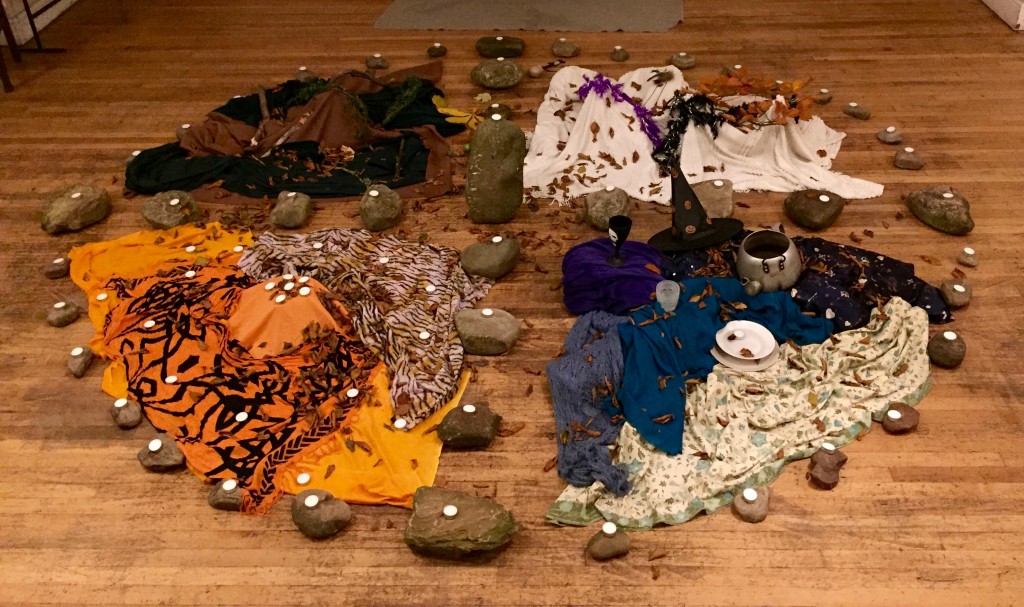 During the course, we had manifest our ‘shadow selves’ (the part of ourselves that we see in others and dislike, which is actually a reflection of ourselves). Our intention was to take our shadow selves, along with our totem animal, (which we had chosen earlier, from a Native American, deck of animal cards) and journey through the Medicine Wheel to the source. There we would receive a teaching, healing and reintegration of our shadow self.

As we all sat around the Medicine Wheel, we were instructed on how the process worked. We were told there are four ‘gatekeepers’. So four possible entrance into the Medicine Wheel. Only one ‘gatekeepers’ would let you in. Your ‘gatekeeper’ would travel with you through the underworld and middle world. Once you got to the spirit world, your ‘gatekeeper’ would leave you and your totem animal, to travel through this world together, whilst carrying your shadow self. I carried mine in a small sack, slung over my shoulder.

We all linked hands and entered a meditative state. Paul then played some music appropriate to the length of the journey we were about to go on. Our first task was to find the right gate, to enter the Medicine Wheel.

I was sat two people away from the person representing the wise old man ‘gatekeeper’. In a meditative trance state, when I got to his gate, he told me this was not the gate to for me to enter the Medicine Wheel. He also gave me the reason why. My gate was to be the next one, looked after by the young man. As I am inquisitive by nature, I chose to find out what reasons the other two ‘gatekeeper’ would give.

Once I returned to the young man’s gate, he told me why I needed to enter via his gate. As we journeyed through the first two worlds together, he explained about lots of events from my past, reflecting on their significance and picking up on some of the pain I had experienced in my life. There was a lot of detail and he treated me with great compassion. When we arrived at the spirit world, he left me and my totem animal to journey through it, on our own.

At the end of the spirit world, we came to, what is call, the source. The life energy, which all of us come from and will eventually, all return to. There I met a past partner who had died, though he was not who I expected to meet. We were able to resolve some unfinished business. After than, me and my totem animal placed the bag containing my shadow self, into the energy source, to receive the healing and unification. Then we retraced our steps, back through the spirit world and rejoined the young man, who was waiting for us.

As we travelled back through the two other worlds, he told me bits about my future path and purpose, in this lifetime. When we got to his gate, I thanked him, bid him farewell and returned to the physical place I was sitting in. I then sat and contemplated the experience, before the music ended and we were asked to come back to the room, open our eyes, reconnect with the other participants and then when ready, share our experience with the person next to us.

As I started to share share my experience, including what I had been told, I had a sudden reality shock – OH MY GOD, WHAT JUST HAPPENED, and was it for real? The more I explained what happened, the more profound the experience became. My brain was trying to be logical and rational – had I made it all up and if that is the case, how come there was so much detail. The young man and other ‘gatekeepers’ had spoken with such clarity and detail. How could I possibly have had a two way conversations like that, whilst in a meditative trance. I had never experience, in my life, anything like that before.

It did happen and the information and teaching I received, has remained with me and true for the last 26 years. I can remember every single detail of what happened and what was said. Though a lot of the information, was only for me.

After the Medicine Wheel I recently facilitated, I received messages from people describing a similarly profound and powerful experience, to that of mine. Some of them also found it to be very insightful.

As a structure, the Medicine Wheel can be used for many different kinds of Ritual & Ceremonies. Every time I experience the Medicine Wheel, I find it to be equally as profound and insightful as my first experience, 26 years ago and even more so when you receive group teachings and insights, which often have crossover teachings.

If you are inspired by this article, to take part in a Medicine Wheel Ritual & Ceremony, please contact me, as I would love to facilitate another one, when I get enough interested people,

Love, light and laughter to you all,